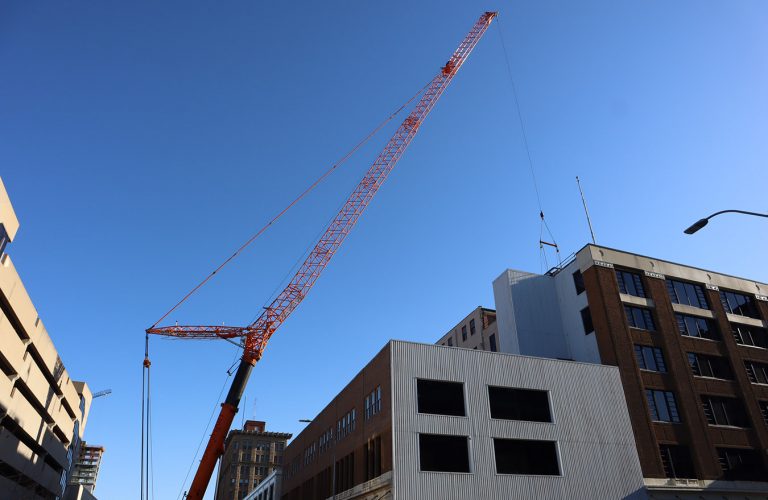 NGC is on site at 1200 N Street renovating the Atrium Building. Once known as the Rudge and Guenzel Department Store in Downtown Lincoln, NGC is performing demolition and upgrades to this 7-story iconic center. The entire building’s space will be remodeled to be commercial office space. There are current tenants during construction.

The Rudge and Guenzel building is over 100 years old. It has housed many different tenants over its lifetime starting with the original owner/tenant Rudge and Guenzel Department store in 1918 when it was built.  The exterior of the building still displays an “R & G” engraved in the limestone. R & G closed during WWII and then its next tenant would be Sears Roebuck & Co. until their relocation to Gateway Mall. Over the past many years, the building became a popular mall on the lower levels, housing many names that are still around today.

The Atrium was not an original feature of the building. It was was added about 45 years ago, coining the name Atrium. This feature helps to make the building seem more open and allows for a lot of natural light to brighten the interior spaces.

NGC is excited to perform all the construction improvements to the building! Speedway bought the building two years ago with a mechanical system operating on life support and a leaky roof. In a effort to revive this historical building all of the roofs and the entire electrical, mechanical, and hydronics of the building will be replaced. These updates will occur during phase I. NGC has installed new air handler units on floors four through seven with three new rooftop chillers to support the entire building.  The next overhaul items needing attention to achieve efficiency, is an entirely new electrical service being added to support all the new equipment. NGC has dedicated an empty room to turn into a new electric room with all new switch gears on the inside and CT cabinets in the alley.  Once this is complete, the old electric room will be removed.

Not only did NGC crews demo the mechanical system, but crews removed all the existing restrooms and offices on floors four through seven adding up to about 78,000 SF.  Once all is updated and there’s a clean slate, NGC will work on adding all new restrooms, mechanical rooms, and elevator lobbies to bring all these areas up to code. On 7th floor trade teams are finishing the entire area with three conference rooms, kitchenette, and a large outdoor party deck.

When the building was built it had four elevators that went to the 7th floor. As years passed four elevators led to two elevators with the removal of the 7th floor stop. The plan is to add back the 7th stop and update the interiors of the cabs. The last piece to this construction puzzle is to remove the old windows and install new windows from the 2nd floor to the 7th floor. The progression is exciting! Stay tuned for more updates about The Atrium Building!

Please contact our webmaster regarding NGC’s Commercial Office Complexes, renovation construction, The Atrium Building or to request an ePDF profile package. Thank you!