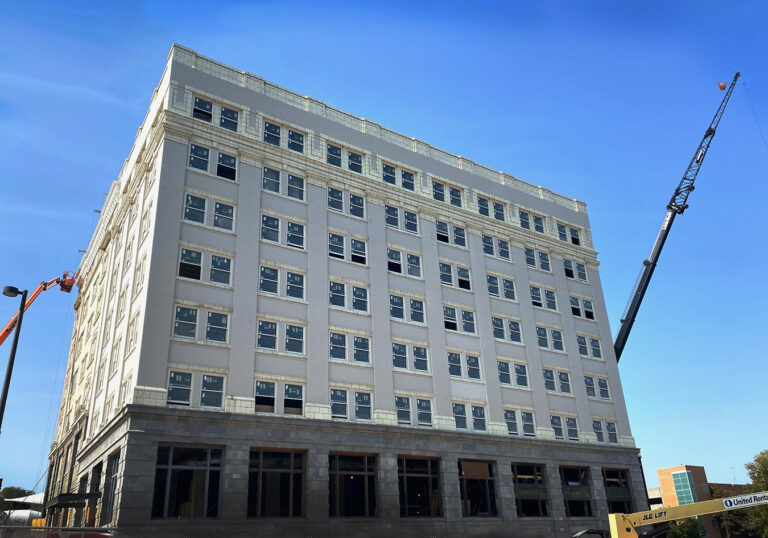 New Generation Construction, NGC, has the honor of restoring, resurrecting and preserving the historic Logan Hotel in Downtown Omaha. The Logan was constructed as an apartment/hotel with commercial space on the lower floors. The historical registration acknowledges this building as a domestic hotel with late 19th century commercial architectural significance.

103 years ago, on less than one acre, an architect named James T. Allan designed a 7-story hotel located at the corner of Dodge Street and North 18th Street. The Logan was designed in late 1917 and completed in late 1918. The street re-grading elevation project was proposed for automobile accessibility. Citizens petitioned a grade changed from 12% to 7% for cars to make it to the top of the hill. Dodge Street’s re-grading, from 17th to 22nd Street had its deepest cut of 20 feet at 20th Street with the street project taking two years; August 1919 until completion in late 1921.

Recently, the 95,322 square-foot property sat vacant for several years, and was scheduled to be demolished by the city in 2016. REV Development arrived to save the building and convert the prime-located, urban site into a Mixed-Use gem.  See REV’s Mike Works’ interview on KETV Channel 7’s 2019 news report.  Once NGC readies the site to open in early 2021, there will be 90 hotel rooms, a lobby, conference room, fitness room and a back-of-the-house area for housekeeping. There will be residential condos on the top floor. At ground level, NGC will relocate its Omaha offices from Harney Street into a renovated space of 4,700 square-feet. There will be a restaurant and speak-easy as well.

This project also had incredible engineering 100 years ago, with plumb lines less than a quarter inch off to this day! NGC’s Field Superintendent Rocky Roberts said, “I plumbed every corner of Logan from the roof and the workers and engineers a century ago sure knew what they were doing! It’s a marvel how accurately and precisely this building was constructed, just amazing.”

Not that there aren’t challenges or a lot of patch work, there is. NGC, along with Alley Poyner Macchietto Architecture and Structural Engineer TD2, collaborate extensively to cure the woes of extinct construction workmanship that doesn’t meet today’s codes. Entirely new elevators, stairwells, ADA, plumbing, electrical, steel beams, firewalls, chutes and HVAC systems are being installed.

The conversion is palpable. The exterior progress is incredible, with new windows, insets, framing, sanding, painting and preservation of the ground-level entrance’s awning. The design for the interior is dramatically-keen, with a fantastic approach of marrying modern aesthetics with antiquity. The renovated hotel rooms, hallways and suites have curved entries and arches, exposed ceilings to the beams, open interior window-cut-outs where possible, and visible 100-year-old tactile brick masonry complete with wood wedges spaced two-feet apart.

The guest rooms and common areas will have new flooring, carpet, tile, furniture, lighting, drapery, doors, windows, trim, decoration, hardware, television monitors, and sprinkler systems. Bathrooms will have new tile in the shower stalls with sliding glass doors, shower heads, sinks, faucets, toilets and mirrors. The interior design is invigorating with deep gray and blue hues with splashes of bright colors, intentional art-deco pattern rugs and stylish accents reminiscent of the past. There’s an appropriate mix of combining the delight of yesteryear with the expected modern conveniences of today. This wonderful bridging will remind patrons they’re experiencing a special and memorable homage stay.

The beautiful marble steps in the lobby will be restored to their original condition; the steps can be admired, but cannot be walked on as the stairwell does not meet code.

Here is an interesting excerpt from the Historic Places Registration form submitted by Alley Poyner Macchietto Architecture: The Logan’s flat-roofed, u-shaped building is constructed of a concrete slab and post structural system. A combination of brick, terra cotta and glass sheath the concrete structural skeleton. Because it is situated at the intersection of 18th and Dodge Streets, both the South and East facades formally address the street. Both facades are organized with a distinct base, shaft and capitol. Shortly after construction was completed the city began an extensive road re-grading project that directly affected the Logan and left lasting visual traces. Originally the building accommodated the existing contours of the site, but after removing 10 to 15 feet of earth, the building’s exterior needed to be reconfigured. Photographs indicated that before Dodge Street was re-graded the only southern entrance into the building was located at what is now the second floor. After the street project, two doors were added both opening onto what is now the first floor.  Although it is one continuous structure, from the primary facades it appears to be two separate buildings, to be identified as the East Building and the West. The East Building rises above grade eight stories in height while the West Building only extends seven. Despite the difference, they share a continuous parapet height. This is made possible by the downward slope of the topography from the west.
Additional data can be found at the Omaha Public Library; Nebraska Collection.

Please contact our webmaster regarding NGC’s historical restorations, remodeling, mixed-use developments, particulars about the 1918 Logan Hotel in Omaha, or to request an ePDF profile package. Thank you!