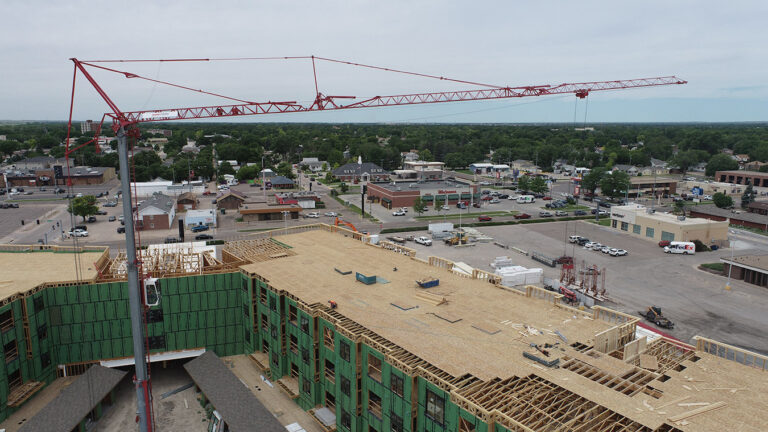 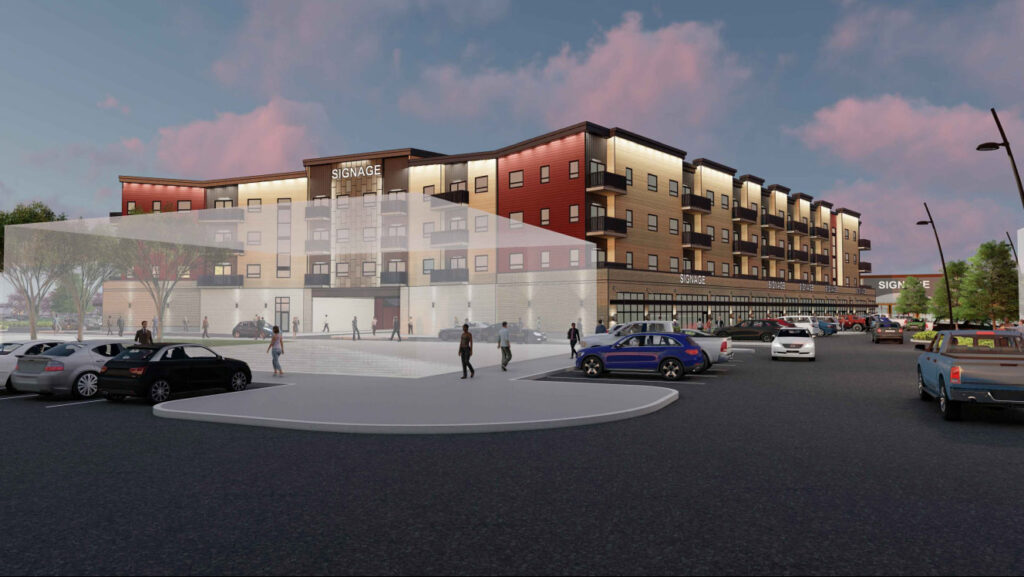 NGC hosted a Top Out achievement party for the Mixed-Use Building (affectionately known as MUB) on Dewey Street in North Platte! Located adjacent to NGC’s District 177 Mall Redevelopment project, the 4-story new ground-up construction project accomplished a wonderful milestone when crews topped-out in June of 2022. Over 90 subcontractors were recognized on June 21st for their tenacity & dedication, and treated with a lunch party which included music, accolades and prizes. Good Life on the Bricks catered a delicious BBQ buffet; pulled pork, brisket, sauces, macaroni, beans and coleslaw was served and totally consumed. Welcomed guests from North Platte’s Chamber and local board members joined in on the festivities too.

Every visitor was asked to sign a steel beam commemorating the achievement. With the help of NGC’s keen superintendents, NGC’s crane operator Scott Wahlman hoisted the structural piece up to the rooftop, where it will be placed for eternity in the North Tower Elevator shaft. Project Leaders from NGC MUB include Project Manager Tanner Letcher, Superintendent Jon Spilinek, Assistant Superintendent Eric Hageman and Project Engineer Griffin Thomas. Griffin is also NGC’s in-house drone aerialist! See his drone flying high in the sky near the lifted beam in the photo gallery, along with exciting drone video footage below.

Project Manager Tanner Letcher thanked everyone for quality work with mindful timeliness, “The project team is excited to get to the top out stage of this project and getting the building dried-in. With the building dried-in, it takes out a lot of factors, mainly weather, that can cause delays and hold-ups to the construction schedule. We are pushing hard and are motivated to finish this project strong to turn over a beautiful building for the people of North Platte and surrounding communities.”

Superintendent Jon Spilinek gave out prize packs during the party for correct and quick answers to the following construction site trivia questions: How many apartment units? What is our square-footage? How high up is the crane’s cab? Name the space we’re lunching in? How many garages are there in the courtyard? Winners received NGC swag bag prize packs for answering accurately, respectively: 96 units, 146,767 SF, crane cab is 115′ high, 32 garages, the lunch was in the lower level, south-end, which will become commercial tenant retail space.

Foundations began in the late summer of 2021. This 147k SF mixed-use (retail and apartments) building consists of commercial retail space on the lower level, 96-apartment units (1 & 2 Bedroom) on levels two through four, plus 32-garages.

Currently, the field crews are working on multiple different phases of the project. The exterior façade work (brick & siding) is getting ready to kickoff, internal MEP rough-ins are continuing and drywall is slated to begin in July of 2022. Completion is scheduled for end of 2022. Congratulations everyone for such great craftsmanship, safety conscientiousness and collaborative teamwork!

Please contact our webmaster regarding NGC’s site work with cranes, top out appreciation events, District 177, the Mixed Use Building, or to request an ePDF profile package. Thank you!