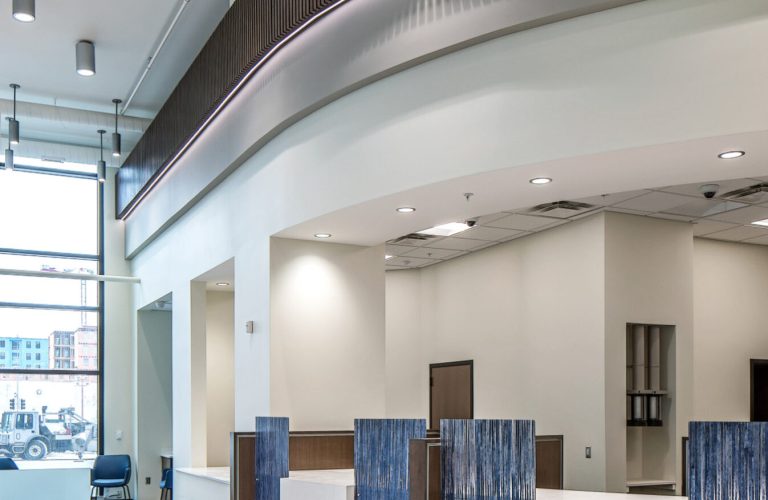 NGC’s recent project in the Terminal Building located at 9th & O St. has a new occupant in First Interstate Bank. The Terminal Building has varying milestones of completion, and with Traction Lofts still under construction, First Interstate’s branch is one of the initial remodeled spaces to open for business. NGC began demolition, tear-out, and code-updates on this 1916 original icon in mid-2021. This 10-story beacon will retain all of the charm from basement to roof, with the first and second floors becoming commercial office space for bank offices and banking clientele, and levels five-ten converting into five residential condos per floor, redeveloped by REV and for sale by Woods Bros, as luxury living spaces. The lower level tenant improvement is about 12,000 SF and NGC constructed the bank’s new drive through canopy in the existing 9th & O parking lot. NGC’s team on First Interstate at the Terminal Building includes: Brian Semerad Project Manager, Jason Donner Superintendent, Brynton Loeffelholz Project Engineer and Amy Pester Project Administrator.
While First Interstate is new to Nebraska, their 2022 merger with Great Western Bank cemented their presence in Nebraska. Great Western was known to many Nebraskans as a good partner on their financial journeys, a legacy that First Interstate is glad to continue.
Originally founded in 1968, First Interstate has evolved from their first branch in Wyoming to the leader they are today. Headquartered in Billings, Montana with over 300 branches across 14 states, First Interstate is a pioneer in banking for the Western United States. Their people-focused brand and services have led to a perfect melding with the craft of NGC’s Construction.
While originally built for Great Western Bank, the merger with First Interstate Bank did not complicate the planned relocation. While the branch was designed with mild incorporations of the Great Western Brand, only minimal differences were needed to accomplish the final design enjoyed by First Interstate’s staff today.
Learn more about First Interstate Bank on their website and be sure to visit their new bank in Lincoln’s Haymarket on 10th & O Streets. NGC is proud to partner with First Interstate and help transform their new space.