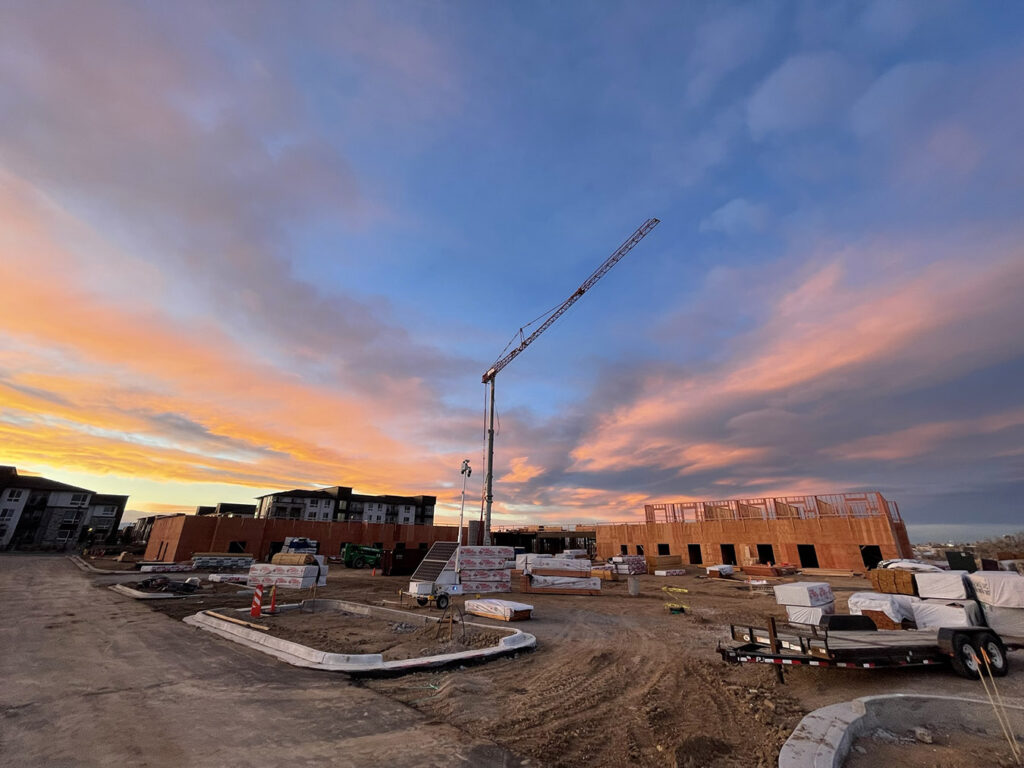 NGC is going vertical at the Hampton Inn Home2 Suites site! This is a new, ground-up, dual-brand hotel by Hilton located in Aurora, Colorado. The framing crews are making great progress. The first floor walls are now up and the second-floor joists are going down. Most of the large parking lot has the bottom layer of asphalt down and parking lot lights are going up—just in time for winter. Eastern Colorado has had a few snows but nothing major, but certainly a reminder of what is coming. For the next few months, NGC will be framing this five-story hotel and the plumbing and electrical crews will be staring rough-in work behind the framers. NGC’s Adam and Tony have a great plan in place to allow the MEP crews to start sooner by bringing the hotel up in halves with the Hampton Inn side going up first and the Home2 side going up second. This arrangement also lessens the demand for skilled crew members.

This hotel will have over 220 rooms, making this build one of NGC’s larger projects by room count and it covers a lot of area; it’s 130,531 SF. NGC’s Ryan and Eli are preparing to order massive amounts of cabinets for the Home2 portion of the hotel and have done a great job of sourcing materials and installers. NGC Senior Project Manager Scott Meinke said, “Let’s hope for a mild winter so the framers can get this building topped out and sealed up!”

The hotel is located at the corner of Oswego Street and Martin Luther King Boulevard. Amenities of this new property will include meeting space, pool, fitness areas, on-site guest laundry, exterior patios with fire pits and BBQ grills.

Thanks to all of the contributors for making this project possible: Visit Aurora, Aurora Chamber of Commerce, Hilton Hotels Hampton Inn Home2 Suites Family, Base4 and NGC Group Inc.

Please contact our webmaster regarding Hampton Inn Home2 Suites in Aurora, or to request information about NGC’s hospitality construction capabilities. Thank you!