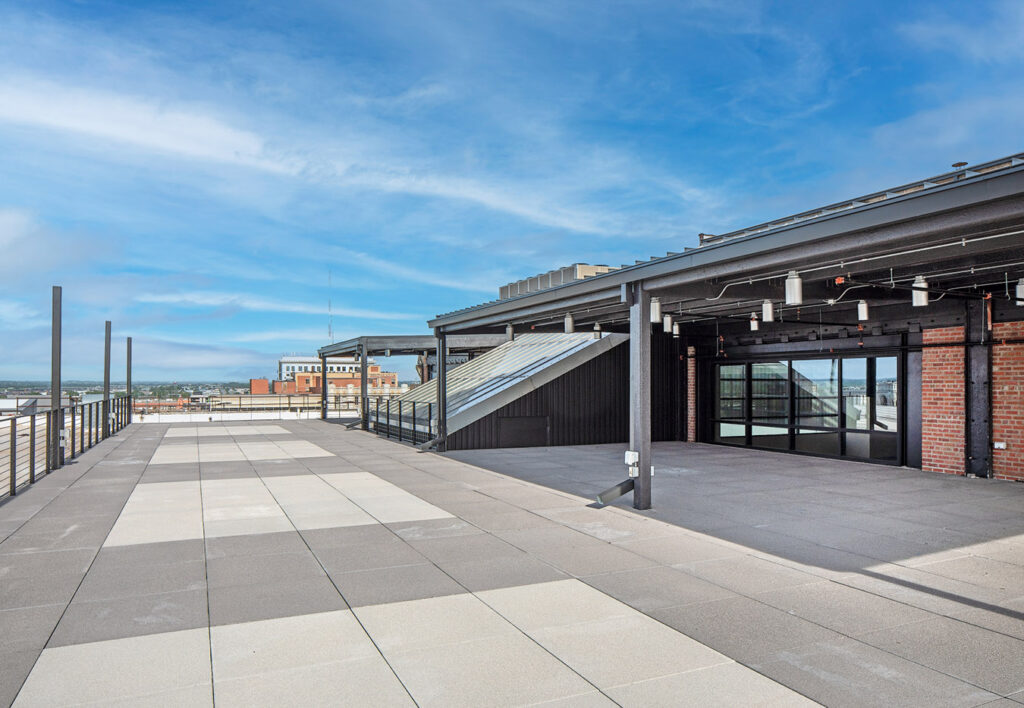 Wonderful improvements to the 104-year old Atrium Building in Downtown Lincoln have been made! NGC achieved substantial completion and performed many upgrades to this seven-story historic landmark. The new installations include: HVAC, roof, windows, restrooms and other mechanical, electrical and hydronic systems. The outdoor sky deck is now fully built-out with steel deck, pavers and standing steam awnings. Substantial completion was reached in August of 2022; some outstanding, minor window and restroom work remains to be done on the second and third floors.

NGC was tasked with demolition-renovation work while tenants occupied the building; The State of Nebraska and a few other businesses operated seamlessly during reconstruction and continue to currently work out of the Atrium, located at 1200 N Street. Combining remodeling with active tenancy requires teams to possess delicate timing, flexibility and a constant willingness to accommodate.

“This project had some interesting work-arounds and spells of pause-outs, but it’s been fun to take an old, historic building in Lincoln and bring it back to life,” said NGC’s Project Manager Jeremy Cook. “A lot of our work entailed some of the less glamorous things like mechanical and electrical system upgrades, but having a great team of subcontractors made the bumps less intense and the bulk of the duration run smoothly,” he added.

This building began as The Rudge and Guenzel Department store, then became Sears Roebuck & Co., then a mall (the atrium to allow in natural light was not an original feature, it was added 45 years ago) and is now a modern commercial office building with fantastic spaces that are available for lease. Areas include conference rooms, kitchenettes, offices and the refreshed and finished rooftop party deck has panoramic views of the skies and Capitol.

Speedway Properties, the building’s owner and property management company, said, “Originally consisting of just the Rudge and Guenzel building, built in 1918, The Atrium Building has adapted, finding new uses throughout the last century. The escalators and atrium, for which the building is now named, are the enduring reminders of its life as a shopping mall. Today, the Atrium’s seven floors house a variety of tenant spaces ranging from engineering and law offices to state agencies.”