NGC Renovates the Terminal Building; Many Stories Among These Ten Stories 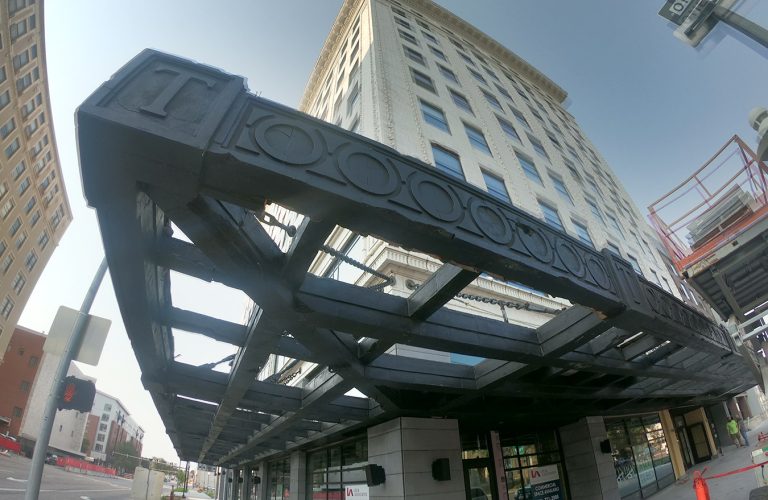 NGC is proud to announce the completion of the Terminal Building’s renovation. Located at 10th and O Street in Downtown Lincoln, this 10-story, century-old, mixed-use icon needed an immense amount of reconstruction, code upgrades and modernization. Throughout the several-month schedule, NGC’s teams and partners stayed cognizant of combining both 1916 nostalgic preservation and safe functionality, along with being predictive for those uncanny surprises that always arrive with projects of this nature.

“The Terminal Building Renovation was exciting,” said Senior Project Manager Brian Semerad. “It is not often we get the opportunity to renovate a 105-year-old historic building, and as with any historic renovation, there were many challenges that had to be overcome,” he added. Team NGC Terminal Building includes:
Brian Semerad –  Senior Project Manager
Brynton Loeffelholz – Project Engineer
Jason Donner – Superintendent
Lonny Egger – Carpenter
Kelly Doan – Project Administrator

NGC’s assignment and ultimate goal was to survive demolition, conquer refurbishment and reopen the Terminal Building so it can reclaim its glory. Enjoy this project’s story, from beginning to end, brick to balcony, antenna to basement…

REV Development, the owner, wished for the lower levels, floors one through four, to remain as commercial tenant space donning new upgrades and improvements. (Danny’s Downtown Deli, now closed, was a staple at this location for years; the sub shop owners embraced retirement in 2021 and exited before NGC began site work.) First Interstate Bank is now open to customers in a portion of level one with all of level two reserved for specialty bank operations. The top half, floors five and up, became residential luxury condominiums, called Traction Lofts.

Where did the teams start? Well, after a deep assessment: most of the building had to be completely gutted. A major challenge was removing all the demolition debris from the building. To accomplish this task, a ten-story tall scaffold with an internal trash chute was built to guide all the debris into dumpsters placed at ground level. A ramp was built from the exterior into the basement where Bobcats were used to demo and haul out all the debris.

The existing basement actually extended out under the sidewalks to the street. As a part of this project, the City of Lincoln required that new basement walls be built at the face of the building and the areas under the sidewalks be backfilled. This work had to occur along two of the busiest streets (10th & O) in Downtown Lincoln without disrupting traffic!

The basement was transformed from a dark, damp, extremely uninviting space into state of the art amenity area for the residents. The basement amenities include a fitness center, pet wash stations, bike wash stations, a great room for gatherings, a theater room, and a storage room with storage lockers. Again, access to these amenities are granted to condo owners for private use.

New balconies were added to the south side of the building on floors five through ten, for Traction Lofts’ condos. These new balconies provide excellent scenic views of the City’s skyline.

The historical lobby on the first floor was kept intact and upgraded with new high-end light fixtures that reflect the historical stylings of a hundred years ago.

For First Interstate Bank, as part of the shell work, NGC constructed a new drive-through in the parking lot on the south side of the building. This was a challenge due to having to cross the City-owned alley with the infrastructure needed to make the drive through operational. The section over the alley had to be designed and built in a manner that could be easily removed in the event the City needs access through the alley with something taller than the drive through. Routing any of the infrastructure underground in the area was not an option due to the amount of utilities already running through the alley.

The third and fourth floor were not completely demolished but still required extensive renovation including new MEP systems, new windows, adding fire suppression systems, and fire alarm systems. The existing tenants had to move out of the building temporarily until all the upgrade and renovations could be made to those floors.

Floor five through nine had new corridors built with high-end finishes to provide access to the new luxury condos that are being built out by NGC. There are five custom condos per floor, averaging 1,500+ square feet in size each.

The tenth floor, now with new windows, is being advertised for customizable condos. It features tall 15’ ceilings and is an available, blank slate waiting for someone to come make it their own.